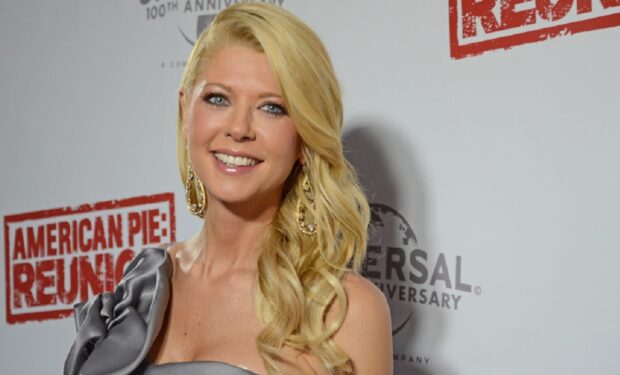 The protagonist of the Lifetime movie The Wrong Cheerleader Coach is teenager Hanna (Madi Burton). After the death of her mom, Hanna and her dad Jon (Corin Nemec) move from Chicago to California to start a new life together. Things are looking up when the head cheerleader coach at Hanna’s school, Ms. Burke (Vivica A. Fox), invites Hanna to join the squad. [More Lifetime movies streaming are always available.]

American Pie and Sharknado star Tara Reid stars as Coach Hughes. In the clip below, she warns Hanna about the new assistant coach Devon (Johanna Liauw), who’s making the moves on her dad Jon.

Tara really chews up the scenery at the end after delivering the line, “I wouldn’t call it love. I’d call it obsession.” Look at those steely eyes!

Get ready to see more of Tara Reid. She has an impressive line-up of movies coming out including the horror film Bleach with Eric Roberts and Lorenzo Lamas, Mummy Dearest with Lou Ferrigno, and the family film Baby Bulldog with Dean Cain.

The Wrong Cheerleader Coach premieres on Lifetime on Saturday, October 17 at 8 pm.