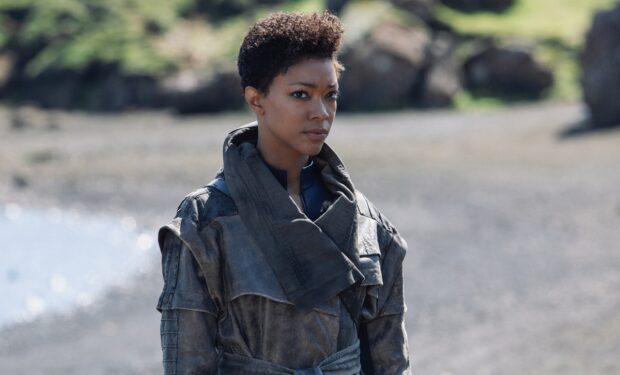 Leading up to the Season 3 premiere of Star Trek: Discovery (October 15), CBS is airing past episodes on Thursday nights. In the Season 1 episode ‘Context Is For Kings,’ Commander Michael Burnham (Sonequa Martin-Green) Burnham finds herself aboard the U.S.S. Discovery, where she quickly realizes things are not as they seem, including the mysterious Captain Gabriel Lorca (Jason Isaacs).

Sonequa is best known for her roles as Sasha on The Walking Dead, Courtney Wells on The Good Wife, and Rhonda on New Girl, among others.

She will appear next on the big screen in July 2021 in the highly-anticipated Space Jam sequel Space Jam: A New Legacy with NBA superstar LeBron James. Sonequa plays LeBron’s wife Savannah James!

Star Trek: Discovery airs Thursdays at 10 pm on CBS. Seasons one and two are available to stream on CBS All Access. [NOTE: Stream any CBS show through Amazon Prime or CBS ALL-ACCESS. Both options offer free trials.]