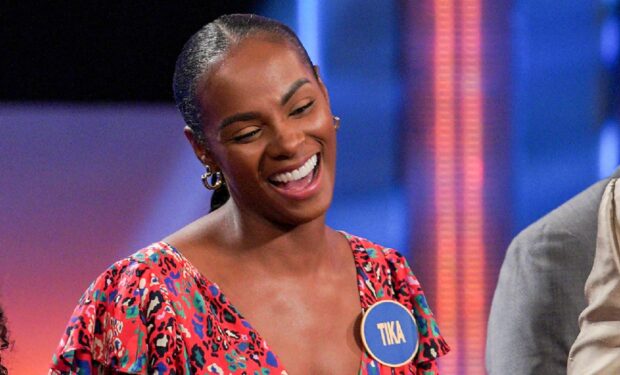 On Season 6 of Celebrity Family Feud, after The Office star Jenna Fischer and Scandal star Scott Foley go head-to-head, the cast of mixed-ish play against a rowdy team of Disney Channel moms including former child star Raven-Symone who now stars in her That’s So Raven spin-off Raven’s Home as a single mom with twins.

On Team Mixed-ish is Tika Sumpter, who wears a stunning red ruffle maxi dress with a deep v-neck and matching stiletto sandals as seen in the photos above and below.

If you want to see more of Tika, check her out in Tyler Perry’s The Haves and the Have Nots as Candace Brown.

Celebrity Family Feud airs Tuesdays at 10 pm on ABC, right after Season 16 of The Bachelorette starring Clare Crawley at 8 pm.