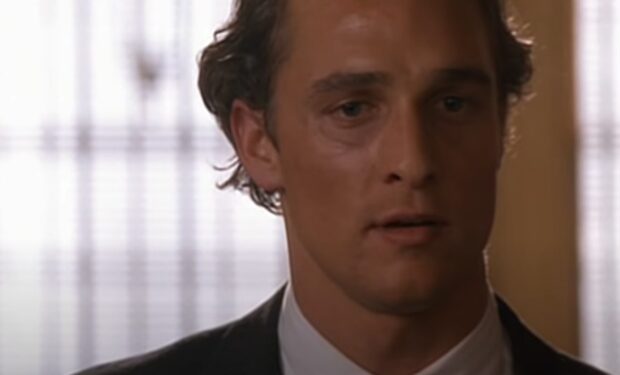 Matthew McConaughey in 'A Time to Kill' (Warner Bros.)

One of Matthew McConaughey‘s first dramatic roles was fearless Mississippi lawyer Jake Brigance in the 1996 movie A Time to Kill based on John Grisham’s novel of the same title. His co-stars were Sandra Bullock and Samuel L. Jackson. He delivered one memorable closing argument (see clip below).

In the video below, 24 years later, McCounaghey says “John Grisham had to approve of me for the role of Jake Brigance which he thankfully did.” McCounaghey points out with great sincerity that without the role, “I would not be where I am today.”

[Related: McConaughey won an Oscar for his leading role in the 2014 film Dallas Buyers Club.]

Also in the video, McCounaghey revisits his A Time to Kill role and reads from Grisham’s new Jake Brigance novel, A Time For Mercy, which is a sequel to A Time to Kill.

Grisham fans hope McCounaghey will do the audio book when available!