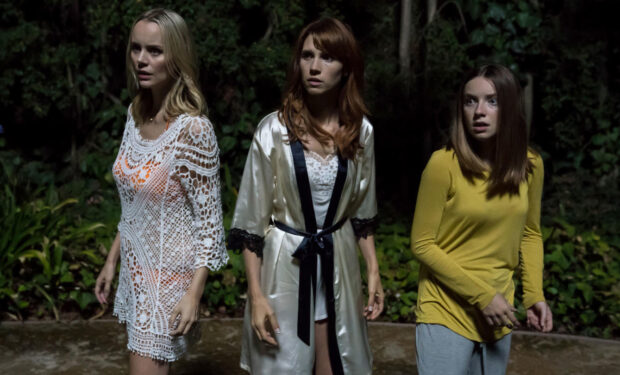 The protagonist of the Lifetime movie Is There A Killer On My Street? (originally titled Neighborhood Watch) is single mom Lindsay Porter (Julie McNiven). When she falls for her handsome new neighbor Stephen (Trevor Donovan), she slowly begins to realize that she, her daughter Jamie (Courtney Grosbeck) and, well, the whole neighborhood – are in great danger.

Julie McNiven also plays Sheryl Trainor in the DC Universe series Doom Patrol. Her character is the wife of Larry Trainor aka Negative Man (Matt Bomer). Larry was a former ace pilot who led a dual life as a closeted homosexual with a lover on the airbase and a wife and two young boys back at home.

Doom Patrol has been renewed for a third season and is moving exclusively to HBO Max for its upcoming run.

Julie is also known for her role as Hildy on Mad Men! See video above.

Is There A Killer On My Street? premieres on Lifetime Movie Network (LMN) on Friday, October 16 at 8 pm. [More Lifetime movies streaming are always available.]