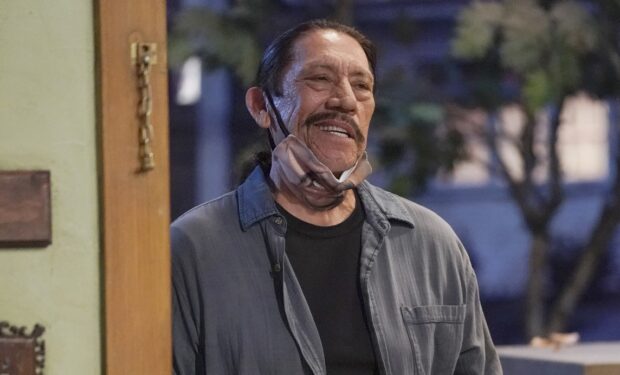 In the Season 3 premiere of The Conners, ‘Keep On Truckin’ Six Feet Apart,’ financial troubles loom over the Conners as they deal with the pandemic. While Becky (Lecy Goranson) and Darlene (Sara Gilbert) look for additional income at the newly reopened Wellman Plastics plant, Dan (John Goodman) is served eviction papers by his neighbor Tito, who’s portrayed by Danny Trejo.

In the scene above, Tito tricks Dan into accepting the envelope by presenting the papers as a construction contract he asks Dan to look at because he thinks he’s getting screwed.

Trejo, a former drug addict and criminal who did time in San Quentin prison, is best known for his on-screen character Machete and for appearances in movies including Heat (Trejo), Spy Kids (Uncle Machete), and Runaway Train, among others.

Watch out: it’s been announced that Trejo is working on his eighth Machete movie: Machete Kills in Space.

The Conners airs Wednesdays at 9 pm on ABC, right after The Goldbergs at 8 pm and right before black-ish at 9:30 pm.