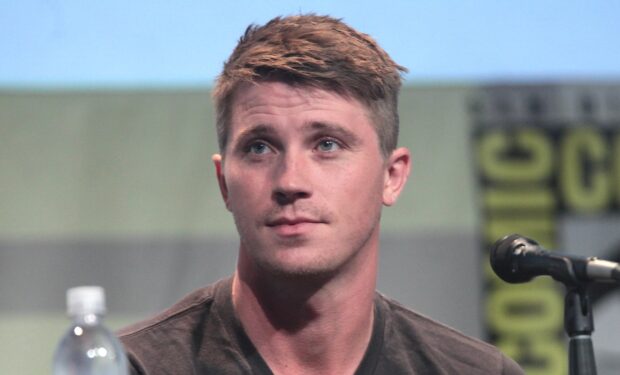 Hollywood movie star Emma Roberts is promoting her new film Holidate. She plays a single woman who hates being single during the holidays so when she meets handsome single Jackson (Luke Bracey), they agree to be each other’s “holidate” for every festive occasion. Holidate will be released on October 28.

In real life, Emma announced on Instagram that she’s pregnant with her first child – it’s a boy! The father of her child is her boyfriend Garrett Hedlund. Swipe photo below to see the happy couple together.

The 36-year-old model-turned-actor Garrett Hedlund is known for his roles on Friday Night Lights (Don Billingsley), Tron: Legacy (Sam Flynn) and Troy, among others.

Garrett will appear next on the big screen in the upcoming biopic The United States vs. Billie Holiday based on the Johann Hari book, “Chasing The Scream: The First and Last Days of the War on Drugs.” The film is directed by Lee Daniels and stars ‘Rise Up’ singer Andra Day as the legendary blues singer.

Anslinger ordered Holiday to stop singing the 1939 song “Strange Fruit” which protests the lynching of Black Americans. She continued to sing the song right up to her death in 1959. Anslinger notoriously handcuffed Holiday to her death bed due to suspicion of drug use and possession.

Author Johann Hari told NPR: Anslinger was considered “so racist that he was regarded as a crazy racist in the 1920s. His own senator for Pennsylvania said he should have to resign because he used the N-word so often in official police memos.” Anslinger held his role as commissioner for 32 years until 1962.

The United States vs. Billie Holiday is expected to be released in theaters on February 12, 2021.