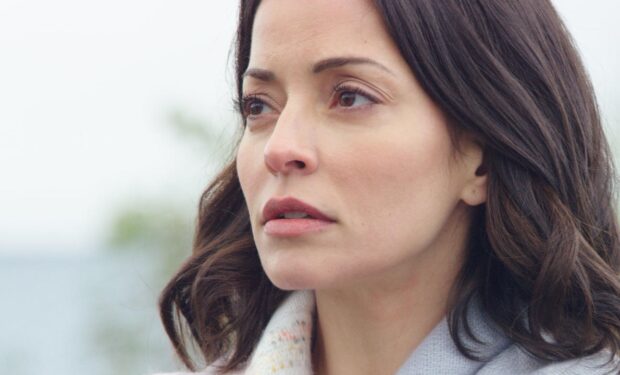 Emmanuelle Vaugier in 'Betrayed By My Husband' (LMN photo)

The protagonist of the Lifetime movie Betrayed By My Husband (originally titled Washed Away) is single mom Gabrielle. After the death of her husband Parker (while kayaking), she tries to remain strong for her young daughter but, when out of town, she swears she sees her husband alive and well. When Parker’s brother is found murdered, guess who’s the number one suspect? It’s an evil plot designed by Parker and his brother’s widow!

Gabrielle is portrayed by Emmanuelle Vaugier. The Canadian-born actress is known for her roles on Two and a Half Men (Charlie Sheen’s girlfriend/ex-fiancee Mia), Mistresses (Niko), CSI: NY (Detective Jessica Angell), and in the 2005 horror film Saw II (Addison), among others.

Vaugier will appear next on the big screen in the thriller film Masks Don’t Lie which is set during Carnival in Venice, Italy. Vaugier’s co-star is Anna Hutchison (in bikini photo above) who played Charlie Sheen’s girlfriend/temporary wife Sasha on Anger Management. Masks Don’t Lie is expected to be released in 2022.

Betrayed By My Husband premieres on Lifetime Movie Network (LMN) on Friday, October 9 at 8 pm.