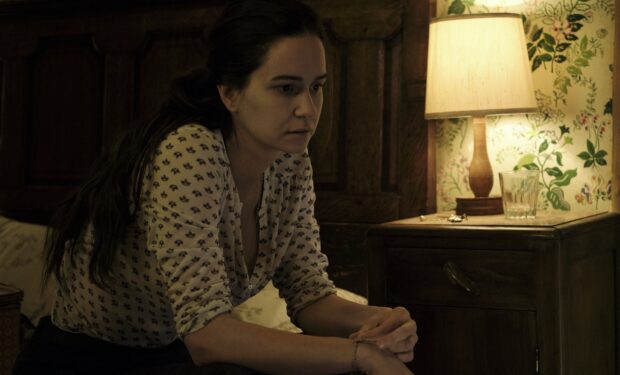 The new HBO miniseries The Third Day is broken up into three parts (Summer, Autumn, Winter) with three interconnected stories. The first, Summer, stars English actor Jude Law as a man named Sam who arrives on a mysterious island off the English coast. There he meets a group of creepy islanders who are set in their strange ways and traditions — and holding a shocking secret.

English-born American actress Katherine Waterston co-stars as Jess. Waterston is the daughter of actor Sam Waterston who is well known for his TV role as ADA Jack McCoy in the Law & Order franchise.

The 40-year-old NYU grad Katherine (who grew up in Connecticut) is also known for her roles in films including Steve Jobs (Chrisann Brennan), Inherent Vice (Shasta Fay Hepworth), Alien: Covenant (Daniels), and in J.K. Rowling’s Fantastic Beasts movies franchise (and yes, she/Tina will be in the third film Where to Find Them), among others.

Katherine will appear next on the big screen in The World to Come with Casey Affleck. The film, which is set in the mid-19th century and on the American East Coast frontier, premiered at the 77th Venice International Film Festival on September 6, 2020.