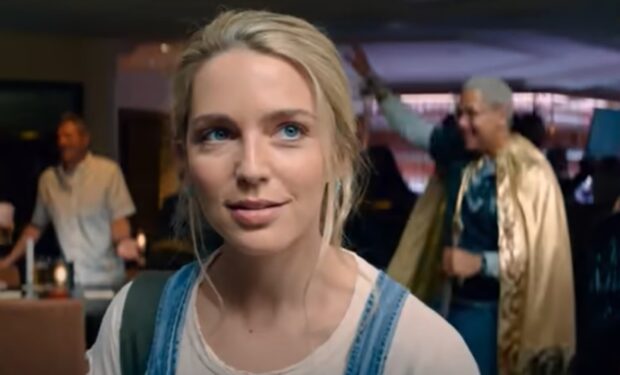 Some might say actors John Cusack (Say Anything) and Rainn Wilson (The Office) are the stars of the new Gillian Flynn (Gone Girl, Sharp Objects) series Utopia but actress Jessica Rothe (Samantha) is the one who shines brightest in the Amazon Original series about young comic book fans who believe a graphic novel predicted a global viral pandemic.

“It’s the End of the World” by R.E.M. is featured throughout the trailer, see below.

When not filming Utopia, Rothe has been frantically planning her wedding to woodworker Eric Clem. They got engaged in February 2019.

This past weekend, Rothe announced that they got married! “Somehow, against all odds, after five years of long distance, a year and a half of panicked wedding planning and replanning and then re-replanning, COVID, fires, murder hornets, and almost losing my shit trying to figure out how to livestream, this past Saturday I was lucky enough to marry my best friend in the whole entire world.”

She added: “This weekend was truly an oasis of joy and pure bliss in the trash fire desert that is 2020. LOVE IS REAL! ❤️❤️❤️❤️ More pics to come…”