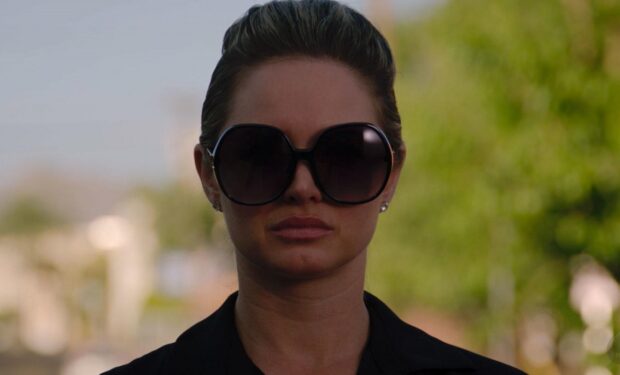 The protagonist of the Lifetime movie The Au Pair Nightmare is Taylor (Brytnee Ratledge). Six months after losing her fiance Brad in a drunk driving accident, Taylor looks to start a new chapter in her life by applying to be the Au Pair for a wealthy family with an 8-year-old daughter Emily (Gianna Gallegos).

But when Taylor moves into the amazing mansion, she discovers her new boss Allesandra (Annie Heise) is crazy and hiding a dangerous secret. [More Lifetime movies streaming are always available.]

Actress Annie Heise is also known for her roles on The Blacklist (Aram’s girlfriend/hacker Elise aka Janet Sutherland, see above and below), the mini-series Madoff (daughter-in-law Stephanie Mikesell), and the soap opera As the World Turns (Ella Vanderberg), among others.

Annie will appear next in the 2021 film I’m Not Him about a man’s (John Palladino, Orange Is the New Black) quest to discover if he was indeed saved by a miracle after being diagnosed as terminally ill. Annie plays his wife.

The Au Pair Nightmare, which was filmed in Albuquerque, New Mexico, premieres on Lifetime Movie Network (LMN) on Friday, September 18 at 8 pm.