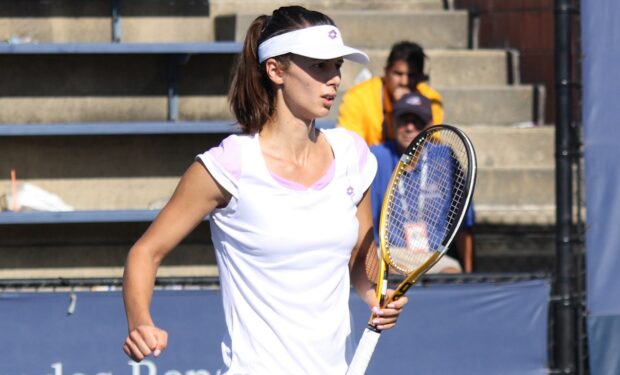 Tsvetana Pironkova is the Bulgarian professional tennis player who has advanced to the quarterfinals of the 2020 U.S. Open. The 32-year-old mother has yet to win a Grand Slam. Pironkova faces Serena Williams on Wednesday, September 9 at 12 noon at the USTA Billie Jean King National Tennis Center in Flushing, New York.

When not on the court, Pironkova spends time with her family (she and her football player husband Mihail Mirchev are parents to 2-year-old son Alexander) and her promoting her own women’s clothing and lifestyle brand, Pironetic. (She used to wear Nike on the court.)

The company, which launched in 2016, offers a variety of colorful leggings, sport bras, tees and tanks.

Pironkova wears her Pironetic brand on the court and off! The clothing company is headquartered in the city of Plovdiv, “in the heart of Bulgaria.”

One of the taglines used to promote Pironetic is “Be Brave” (see above).