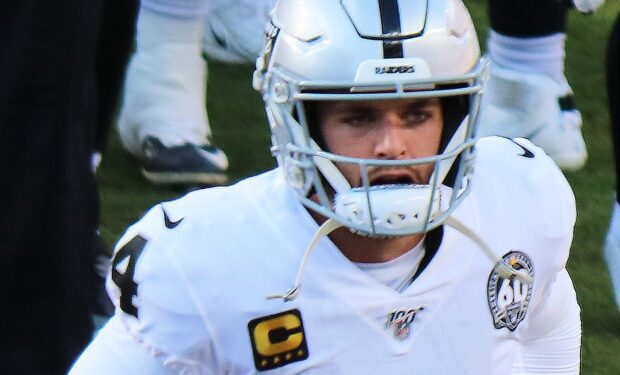 Derek Carr is the 29-year-old NFL quarterback for the new Las Vegas Raiders. After playing college football at Fresno State, he was drafted by the (then Oakland) Raiders in the second round of the 2014 NFL Draft.

So far so good for Carr in this strange, pandemic-afflicted 2020-21 NFL season: he finished his Week 1 game with 239 passing yards and a touchdown to beat the Carolina Panthers, 34-30.

When not on the field or posing for the cover of Las Vegas’s Haute Living magazine (see above), Carr spends time with his wife of eight years Heather Carr, and mother of his three sons: Dallas, Deker and Deakon.

When Derek sent his happy anniversary wishes to his wife this year, he posted the cute couple photo above and added in the caption: “Your (sic) hot.”

Watch Derek Carr and the Las Vegas Raiders play against Drew Brees and the New Orleans Saints from Allegiant Stadium on Monday Night Football, September 21 at 8 pm on ABC.