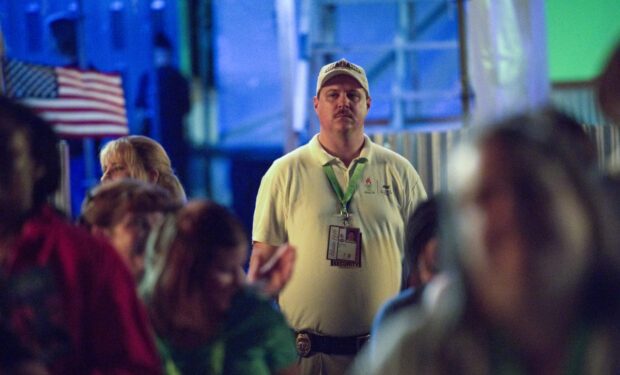 The first episode of Manhunt: Deadly Games, ‘CENTBOM,’ tells the story of security guard Richard Jewell. He was working security at the 1996 Atlanta Olympics when he discovered a backpack with a bomb in it. He helped evacuate the area before the bomb exploded and was, at first, considered a hero for saving people. But then he became a suspect by the FBI.

After 88 days of public scrutiny (he was never charged), Jewell was cleared as a suspect. When caught, FBI Top Ten fugitive Eric Rudolph eventually confessed and pleaded guilty (to avoid the death penalty) to the Centennial Park bombing and three others including the bombings of a gay club and two abortion clinics. Jewell died of natural causes in 2007 at the age of 44. Rudolph is serving four consecutive life sentences in prison.

When recently asked what kind of character he’d like to play next, Cameron said: “I’d like to play someone who isn’t disturbed or troubled. I do really like focusing on people’s faults. I like characters who make mistakes. But it would be nice to play a more confident fellow for whom things are going right.”