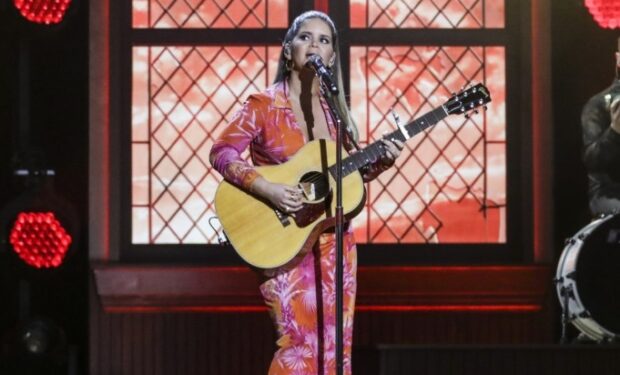 Maren Morris is the most nominated female artist at this year’s Academy of Country Music Awards – she’s up for four awards including Female Artist of the Year and Album of the Year. She will perform for the first after giving birth to her first child, son Hayes, in March.

Maren last performed live at the Houston Rodeo in March (see photo below), when she was nine months pregnant!

Maren recently told CBS This Morning that the last hours of her pregnancy were “pretty gnarly.” She was in labor for 30 hours (her son was breech) before having an emergency c-section.

After her son Hayes was born in March, when the world started to close down due to the pandemic, Morris says she battled postpartum depression.

“I’m kinda coming through the tunnel now. I feel back to normal” and added, “fortunately I was able to phone therapy during the pandemic.”

While Maren struggled with depression this spring and summer, her song “The Bones” (on her GIRL album) spent 19 weeks as the #1 song on the country chart, breaking the record for a female solo artist.