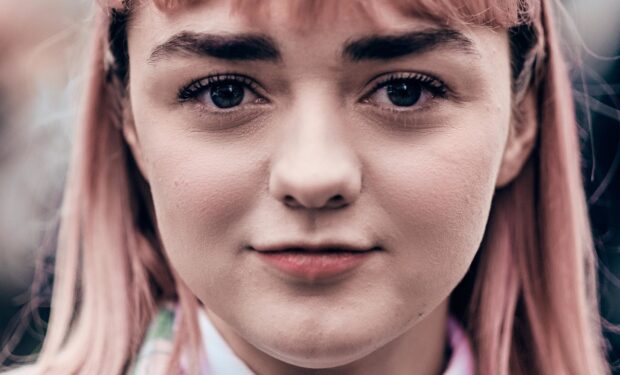 The Weeknd is on the October 2020 cover of Rolling Stone magazine, and for good reason. It’s the 2021 Grammy Preview and many predict The Weeknd’s “After Hours” will win Album of the Year. His After Hours tour, which was postponed this year due to COVID-19, is set to begin on June 12, 2021 in Vancouver and end on November 11 in Berlin.

When the 30-year-old Canadian singer, songwriter and producer posted the series of photos above and below, he described himself as the “red suit character.” It reflects the After Hours album cover sans creepy horror movie blood on his face.

When actress Maisie Williams saw The Weeknd’s post, she dropped a fire emoji.

The 23-year-old British actress who’s best known for her role as Arya Stark on Game of Thrones is currently starring in the horror film The Owners.

It’s a about a group of friends (including Mary/Maisie) who break into an empty mansion with a safe full of cash. “But when the elderly couple that lives there returns early, the tables are suddenly turned. As a deadly game of cat-and-mouse ensues.”