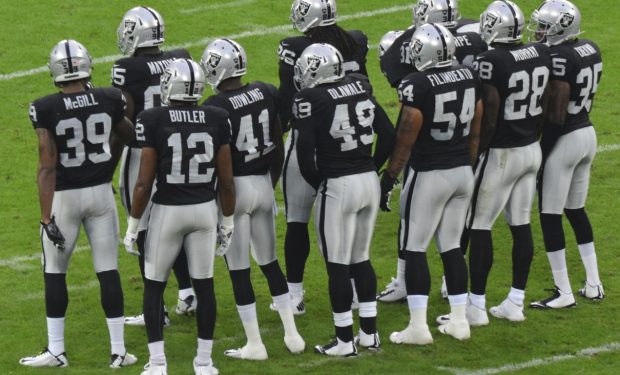 NFL football fans know the legend of the original Oakland Raiders. The California team was founded in Oakland in 1960, moved to Los Angeles in 1982 and then returned to Oakland in 1995. Twenty-five years later, the Raiders have relocated to Las Vegas, the sin city’s first NFL team. And they get to play in the brand new Allegiant Stadium.

To get Raider Nation pumped about the Las Vegas Raiders, the franchise produced a video that’s Hollywood blockbuster movie-worthy. Narrated like an episode of American Greed, the promotional video featuring all the Raiders legends including Madden and Marcus is succeeding in sending chills and goosebumps to fans. One wrote: “Straight chills!” and another wrote: “Chills watching this.”

One loyal fan asked if the narrator was the same who read the team’s famous ‘The Autumn Wind’ poem (listen below). But it’s not. The poem was narrated by the late great John Facenda, the NFL Films narrator aka “the Voice of God,” who passed away in 1984.

The first event at the new domed Allegiant Stadium is the Raiders vs. New Orleans Saints game on Monday Night Football, September 21 at 8pm on ABC. It will also be the site of the 2021 Pro Bowl.