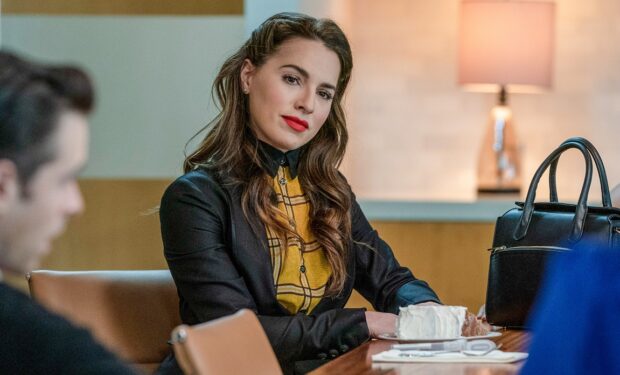 Kim Cattrall (Sex in the City) stars in the new soapy family drama Filthy Rich. She plays Margaret Monreaux, co-founder of a Christian TV network she built with her husband televangelist Eugene Monreaux (Gerald McRaney). Eugene dies in a plane crash and makes her worth $2.2 billion.

When she gathers her children for the reading of the will, they meet Eugene’s other three illegitimate children (whom he secretly fathered with three different women). One of the three — the most vengeful — is Ginger Sweet who is portrayed by Melia Kreiling.

When not filming Filthy Rich, Melia (who was raised in Athens, Greece; her mother is Greek, her father American) spends time reading and sometimes in a bikini as seen in the gorgeous photo above. She wrote: “I’m never taking it off.”

Melia is also known for her roles on Tyrant (Daliyah Al-Yazbek), The Borgias (Bianca), and the 2014 film Guardians of the Galaxy (Bereet), among others.

Filthy Rich premieres on Monday, September 21 at 9 pm on FOX.