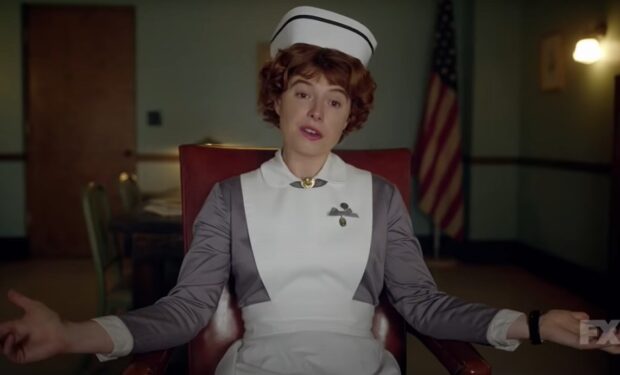 Season 4 of Fargo is set in 1950 Kansas City, Missouri. Stand-up comedian Chris Rock stars as Loy Cannon, head of an African-American crime syndicate that goes to war with the established Italian mafia. One of the few female roles is the most memorable — the nefarious nurse, Oraetta Mayflower.

She’s portrayed by 30-year-old Irish singer (listen to clip below) and actress Jessie Buckley, who said of her character: “She’s bad-ass wrapped up in a lovely chocolate sweet.” Chris Rock said of Buckley: “She’s got the best part.”

Americans will recognize Jessie Buckley from the 2020 film Dolittle opposite Robert Downey, Jr. (Queen Victoria) and from the 2019 biopic Judy opposite Renee Zellweger (as Judy Garland’s faithful assistant Rosalyn Wilder).

Jessie will appear next on the big screen in the Maggie Gyllenhaal directed drama The Lost Daughter based on the Elena Ferrante novel, opposite Dakota Johnson.