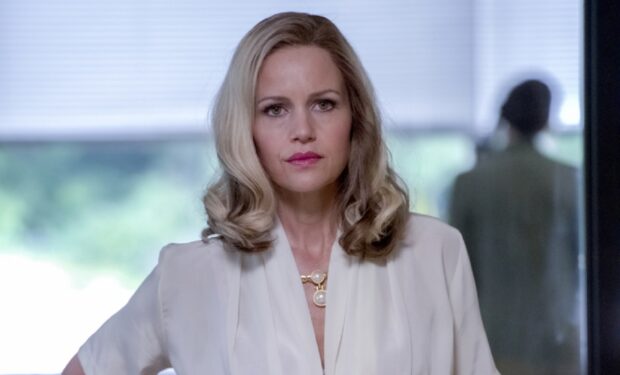 The true crime series Manhunt: Deadly Games tells the story of Richard Jewell, the security guard who discovered the bomb that went off and killed a woman at the Centennial Park of the 1996 Atlanta Olympics. (Jewell’s discovery saved countless lives.) Jewell was considered a hero by the media until the Atlanta Journal–Constitution reported that the FBI suspected the ‘hero’ guard may have planted the bomb.

Note: Jewell was never charged and he was eventually cleared after 88 days of public scrutiny after the FBI top ten fugitive Eric Rudolph confessed to the bombing.

Gugino is known for her roles in big Hollywood movies including San Andreas with Dwayne “The Rock” Johnson (and yes she’ll be in the sequel!), Watchmen (Sally Jupiter aka Silk Spectre), American Gangster (Laurie Roberts), Sin City (Lucille), Night at the Museum (Rebecca), and the Spy Kids movies (Mom/Ingrid Cortez), among others.

Fun fact: Gugino launched her acting career in a 1988 episode of Who’s the Boss? with Judith Light who plays Richard Jewell’s mother Bobi!