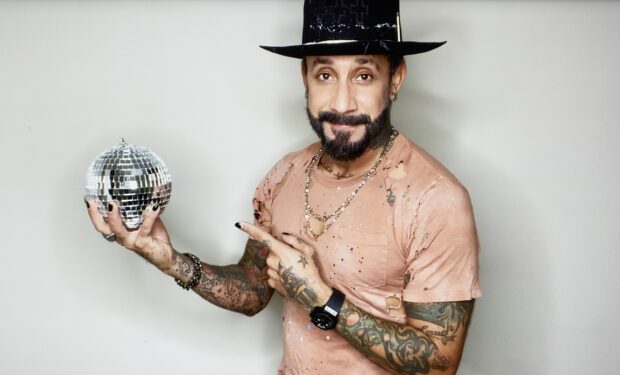 AJ McLean on DANCING WITH THE STARS (ABC/Frank Ockenfels)

AJ McLean, member of the all-boy-now-men band Backstreet Boys, is one of the celebrity contestants on Season 29 of Dancing with the Stars with new host Tyra Banks. When asked why he decided to compete on DWTS, he said his two daughters, 7-year-old Ava and 3-year-old Lyric, have inspired him.

In the video above, 42-year-old AJ says both his daughters are dancers and his oldest, Ava, is a competitive dancer. AJ said he wanted to show them that “even Daddy, who’s a performer, can step outside his comfort zone and try new things.” He’s never done any kind of ballroom dancing.

In February, AJ posted the photo above of Ava with celebrity choreographer and Ellen’s new producer Stephen Boss aka tWitch (and husband of former DWTS pro dancer Allison Holker).

AJ says tWitch told Ava “she’s got daddy’s moves and ambition and she kicked butt in his class.”

AJ also took a class with tWitch before the Backstreet Boys DNA Tour!