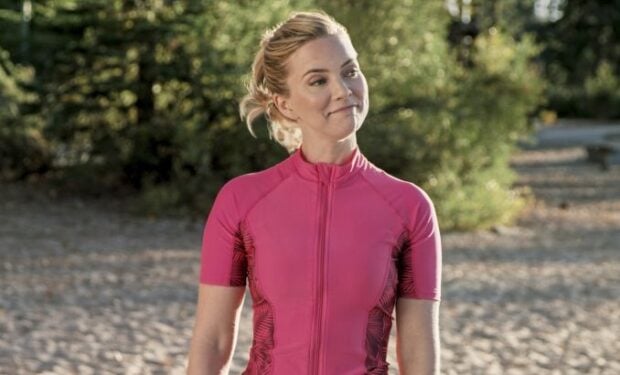 Cindy Busby in Romance in the Air (Hallmark/Crown Media)

The protagonist of Hallmark Channel’s new summer movie Romance in the Air is a gorgeous single woman named Eden (Cindy Busby). After learning her job is on the line, Eden returns to the lake where she used to spend her summers growing up.

There she’s reunited with her handsome childhood friend Riley (Torrance Coombs) and finds that “the draw of her past might direct her future to a happiness she’s been missing in her life.” [So many Hallmark movies, streaming here.]

The gorgeously shot TV movie — which features paddleboarding and hot air balloons! — was filmed in Salt Lake City and on Lake Tahoe, the large freshwater lake in the Sierra Nevada Mountains which straddles the border of California and Nevada.

Romance in the Air premieres on Hallmark Channel on Saturday, August 1 at 9 pm.