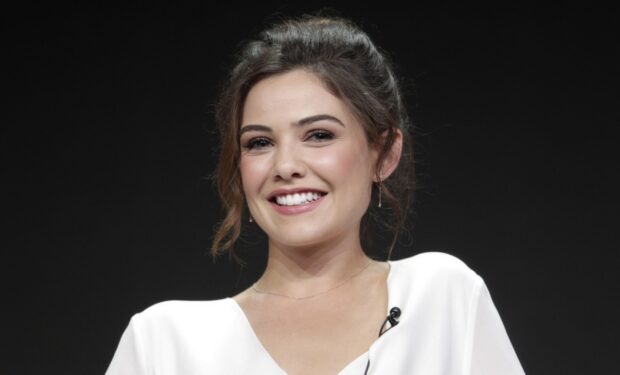 Danielle Campbell of TELL ME A STORY (Francis Specker/CBS)

In the psychological thriller series Tell Me a Story legendary fairy tales including The Three Little Pigs, Little Red Riding Hood, and Hansel and Gretel are re-imagined as modern-day thrillers set in New York City.

In the Season 1 ‘Chapter 3: Greed’ episode, high school senior Kayla (Danielle Campbell aka Little Red Riding Hood) is determined to keep her and Nick’s (The Wolf portrayed by Billy Magnussen) relationship a secret, but Ethan’s (Rarmian Newton) jealousy threatens to derail her plans. See the blackmailing clip below.

When not promoting Tell Me a Story (which is now airing on CW after its debut on CBS), Danielle spends time with her boyfriend, actor Colin Woodell. Both starred on The Originals. Danielle starred as Davina Claire, Colin played Aiden.

Woodell will star next in the forthcoming HBO Max series The Flight Attendant with Kaley Cuoco.

Tell Me a Story airs Tuesdays at 9 pm on CW, right after Stargirl starring Brec Bassinger as the DC Comics teenage superhero.