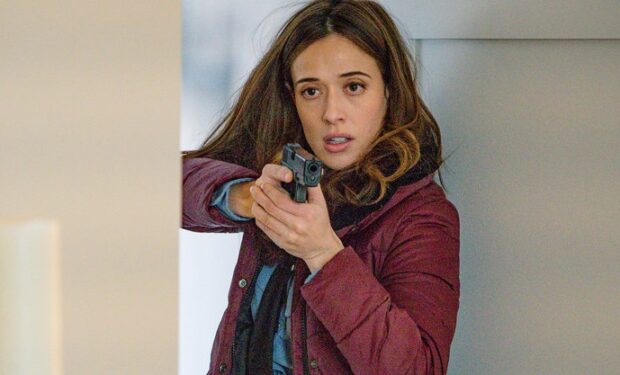 In the Season 7 episode of Chicago P.D. ‘I Was Here,’ while working the 911 desk, pregnant police officer Kim Burgess (Marina Squerciati) receives a call from a girl in distress who asks for help. But when Burgess dispatches police officers to the address from where the call was made, “no police service” was reported needed.

Later, Burgess enlists the team’s help to track down the girl who, it turns out, is caught up in a sex-trafficking ring.

Many Chicago P.D. fans and reviewers were shocked by the “brutal, unexpected, and unnecessary” episode. Burgess ditches the 911 office, shows up at the hotel where the girl is, doesn’t wait for back-up, gets beat up in a bathroom including a punch to the stomach and loses the baby.

One TV Fanatic critic called it “one of the worst scenes on Chicago PD to date.” Burgess’ actions showed her dedication to the job (the team was able to save 19 girls from the prostitution ring) but not enough to herself or the safety of her baby.

This Chicago P.D. episode originally aired in February 2020 — prior to the murder of George Floyd in May and the subsequent surge of Black Lives Matter demonstrations against police brutality. The episode is re-airing on Wednesday, August 12 at 10 pm on NBC.

Police procedural dramas including Chicago P.D. are under scrutiny in the wake of George Floyd’s murder and the Black Lives Matter movement for portraying police officers as being “relentlessly good and heroic” especially the Chicago P.D. character Hank Voight, Burgess’ boss, who is known for using “dirty cop tactics.”

Will the show change course in the future? Fans will find out on Season 8. On February 27, 2020, NBC announced renewing eight, ninth and tenth season of Chicago P.D.