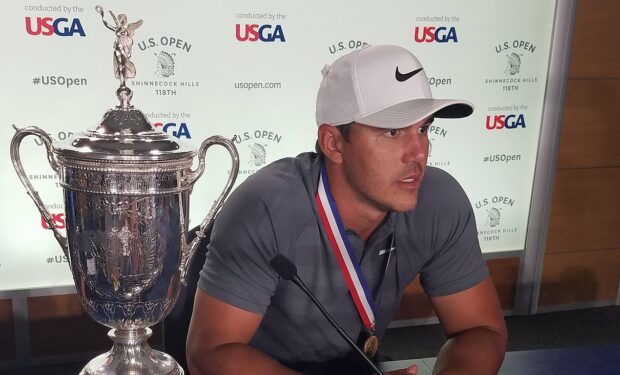 When not on the course, the 30-year-old Florida native Koepka (who won his fourth major at the 2019 PGA Championship at Bethpage Black) spends time with his gorgeous girlfriend, bikini model Jena Sims, as seen above. P.S. That strappy red swimsuit is at Revolve.

Days before the PGA Championship started, Jena posted the four-photo post above, where she demonstrates how to wear a blue string bikini top in four different ways.

The super beauty asked her tens of thousands of followers “Which is your fav?” Several fans opted for the bottom left strapless look; her boyfriend Brooks replied to her question: “When it’s off.”

More than 1,000 replies were left after Brooks’ comment praising him for the comment including: “you won the internet today” and “this is why you’re the goat.”

The PGA Championship is broadcast live from TPC Harding Park at 7 pm the Golf Channel.