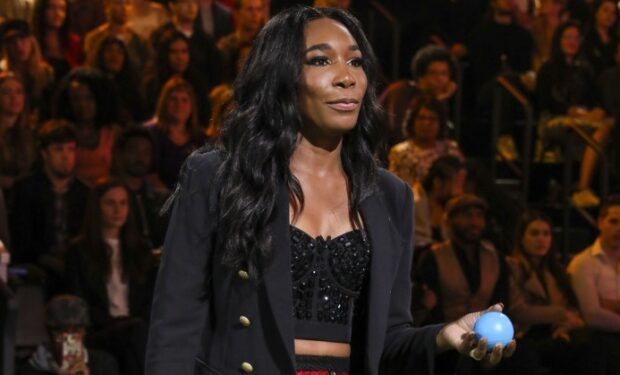 Tennis legend Venus Williams is one of the professional athlete stars and producers of the new CBS game show Game On with Super Bowl champion Rob Gronkowski. On the ninth episode of Season 1, while wearing a sequined bustier, tiny mini skirt and white heeled booties, Venus partakes in another outrageous challenge that suits her skills to a tee.

In the video above, Venus takes aim at her teammate, stand-up comedian Ian Karmel. She reports that he “didn’t get (terribly) hurt.” When singer Seal saw it, he replied: “LOVE IT!!!!” P.S. Venus and Seal have been working out together. See video below.

Game On! airs Wednesdays at 9 pm on CBS. [Watch CBS on your phone with Amazon Prime or CBS ALL-ACCESS. Both options offer free trials.]