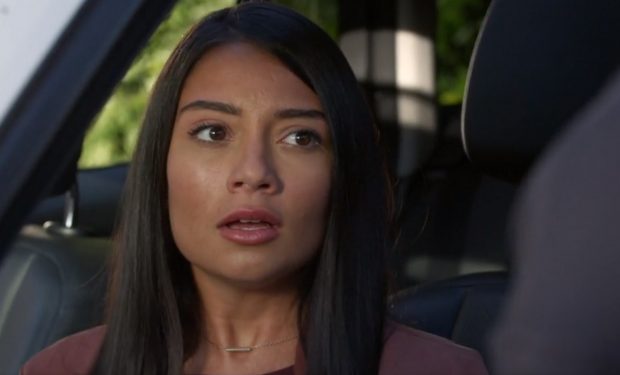 Cristine Prosperi in The Wrong Cheerleader on LMN

The protagonist of the Lifetime movie The Wrong Cheerleader is intelligent and sociable high school senior Becky who’s played by Canadian-born actress Cristine Prosperi. Prosperi is best known for her role as Imogen Moreno on Degrassi: The Next Generation and for looking amazing in a string bikini as seen below.

She writes that she’s “obsessed” with the black two-piece below and adds: “The style is cute af and the fit is so flattering!!!!!” [More Lifetime movies streaming are always available.]

When Becky makes the cheerleader squad — which is led by Ms. Flynn (the TV movie’s producer Vivica A. Fox) — the cute new boy at school Rob (David Meza) turns his affection toward Becky… not in a good way.

The Wrong Cheerleader premieres on Lifetime Movie Network on Friday, July 24 at 8 pm.