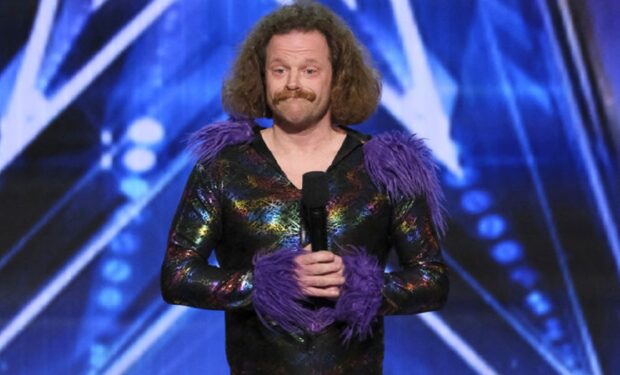 Stand-up comedian Alex Hooper of Los Angeles is getting a second chance on America’s Got Talent. While wearing a lot of spandex and a tail, the wild-haired Hooper insulted the judges (Howie Mandel, Mel B, Heidi Klum, Simon Cowell, and host Tyra Banks) during his AGT Season 13 in 2018.

Simon Cowell was the only one who enjoyed the performance; see video below.

Days before his re-appearance on America’s Got Talent (Season 15, July 14) and in front of new judge Sofia Vergara, Hooper reports: “I wrecked myself a week ago. Lost control, flattened out in mid-air, and fell really hard on my back and head from about 4 ft up.”

But Hooper is seeing the sunny side of the situation as he recovers. He shared the video above in which he walks 95 ft backwards on a slackline and in 60 seconds! America’s Got Talent airs Tuesdays at 8 pm on NBC.