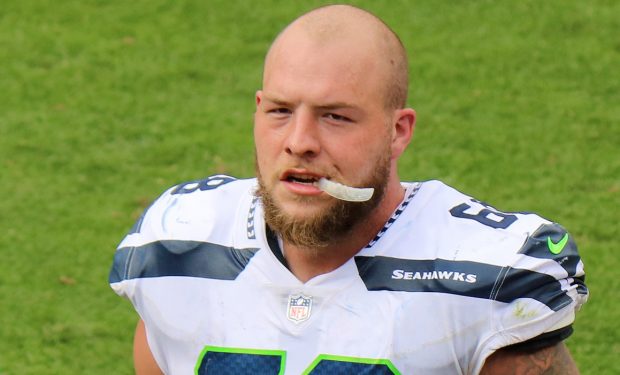 Justin Britt is the 6’6”, 315 lb. NFL center known for playing with the Seattle Seahawks. He played college football at Missouri before the Seahawks drafted him in the 2014 NFL Draft.

While sports everywhere are basically on hold, NBCSN is airing NFL’s Greatest Games including the 2015 Super Bowl XLIX. Britt was in the starting lineup for the Seahawks who lost to the New England Patriots (28-24).

When not on the field, Justin Britt spends time with his gorgeous wife and mother of two Alicia Britt, who looks amazing in a bikini as seen in the photos above.

Alicia captioned the before and after selfie post above: “Strong is the new skinny.”

Mrs. Britt is now pregnant with her third baby (see cute pic below) and still she looks amazing in a bikini!