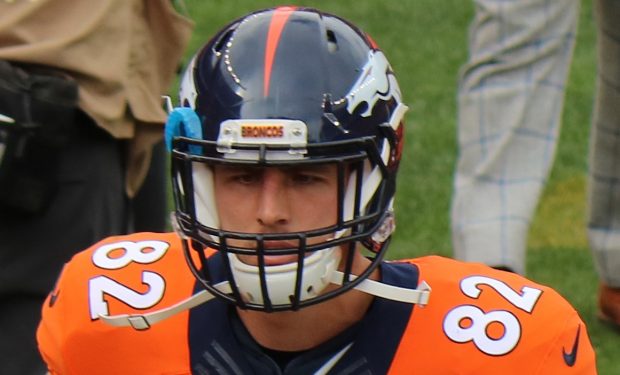 Jeff Heuerman is the 6’5”, 254 lb. NFL tight end playing for the Denver Broncos. The 27-year-old Super Bowl 50 champion played college football at Ohio State before he was drafted by the Broncos in the 2015 NFL Draft.

In March 2019, he signed a two-year, $9 million contract extension with the Broncos, right after he married his gorgeous wife, Pilates instructor Hannah May.

When not on the field or in the Pilates studio, based on the bikini photos above and below, Jeff and Hannah have been enjoying their newlywed year. As one fan wrote: “That’s hot.” (Hannah’s red bikini photo down below these couples pics is absolutely sizzling!)

Congratulations to the happy handsome couple who just became parents in February 2020. It’s a boy and his name is Beau! Swipe photos below.

P.S. ESPN is airing NFL’s Greatest Games including the 2018 Kansas City Chiefs vs Denver Broncos game (Heuerman: 4 REC, 57 Yards) on Monday, May 18 at 8 PM. [Watch on your phone with ESPN digital app. It’s free to download.]