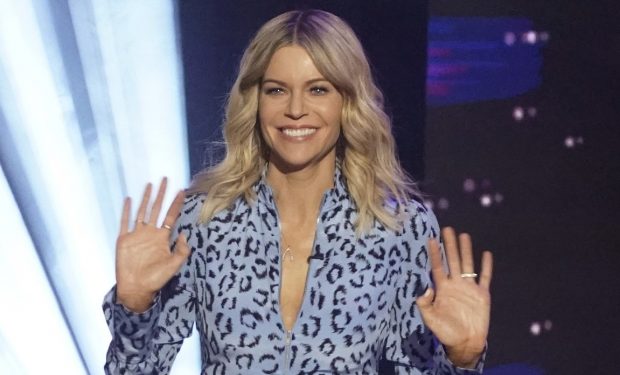 Kaitlin Olson, WHO WANTS TO BE A MILLIONAIRE (ABC/Eric McCandless)

On the seventh episode of Who Wants To Be A Millionaire, host Jimmy Kimmel welcomes Dr. Phil, comedian Lauren Lapkus and Hollywood comic actress Kaitlin Olson to the game.

The gorgeous 44-year-old mother of two Olson is playing for the Cystic Fibrosis Foundation.

When not on a TV or movie set, Kaitlin spends time with her husband of 11 years, her It’s Always Sunny In Philadelphia co-star Rob McElhenney and their kids — and sometimes in a tiny white lace bikini as seen in the amazing photo above.

In the video above, Kaitlin (in the striped string bikini) and the family are celebrating the beginning of the year and “jumping right in.” Kaitlin admits: “some are more graceful than others, but who cares – it’s the jumping that counts.”

Kaitlin is currently starring in Flipped with Will Forte, Eva Longoria, and Andy Garcia. It’s a feature film on Quibi which is broken into several chapters under 10 minutes in length.

Who Wants to Be a Millionaire airs Thursdays at 8 pm on ABC, right before NBA star Steph Curry’s game show Holey Moley II: The Sequel where miniature golf enthusiasts compete on an extreme obstacle golf course. [Watch on your phone with the ABC GO Digital App found here. Download is FREE.]