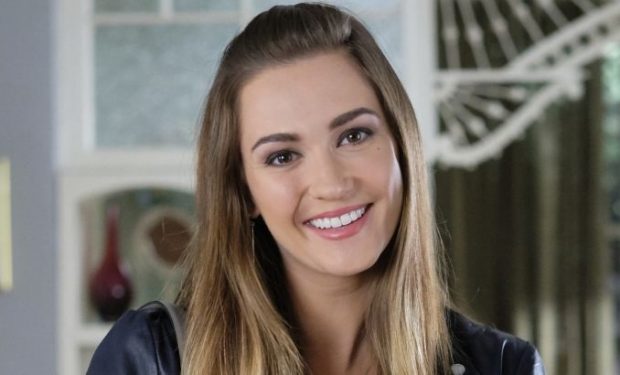 In the Season 6 premiere of Good Witch, ‘The Anniversary,’ while Cassie (Catherine Bell) and Sam (James Denton) get ready to celebrate their first wedding anniversary and without their kids Grace and Nick (Bailee Madison and Rhys Matthew Bond are no longer on the show), Cassie welcomes a new guest at her bed and breakfast Grey House.

Her name is Joy Harper and she claims she’s in town to vie for the renovation job at the mayor’s mansion. But it turns out Joy has an agenda and it involves snooping around the Merriwicks.

Joy is portrayed by actress Katherine Barrell. The 30-year-old Canadian-born actress is known for her roles on Workin’ Moms (Alicia Rutherford), Wynonna Earp (Nicole Haught), and in the 2017 movie Girls’ Night Out (Sadie), among others.

When she posted the stunning braless princess dress photos above, she wrote: “This boss bitch is deleting insta for the week to focus and GET SHIT DONE. See you on the flip side.”

She also looks amazing in a bikini.. and without pants!