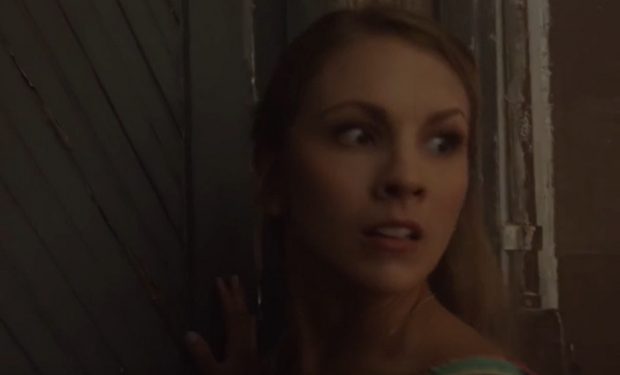 Lanie in Engaged to a Psycho (LMN)

The protagonist of the Lifetime movie Engaged to a Psycho (originally titled Murder at the Mansion) is Deanna (Anna Hutchison). She and her fiance Karl (Jason-Shane Scott) travel to his family’s remote countryside estate where they plan to be married.

But someone in Karl’s family is willing to kill the bride in order to stop the marriage. Karl’s former fiancee, Nicole, is portrayed by Lanie McAuley.

When not on a TV or movie set, Lanie McAuley— who’s best known for her role as Emma Rogers on Hallmark Channel’s Chesapeake Shores — enjoys the outdoors and often in a bikini as seen in the gorgeous photos above and below. As one fan wrote: “You are such a sexy beast, Lanie! RAWR!!”

She captioned the striped bikini pic below: “pretty big fan of frolicking…”

Engaged to a Psycho premieres on Lifetime Movies Network on Friday, May 15 at 8 pm.