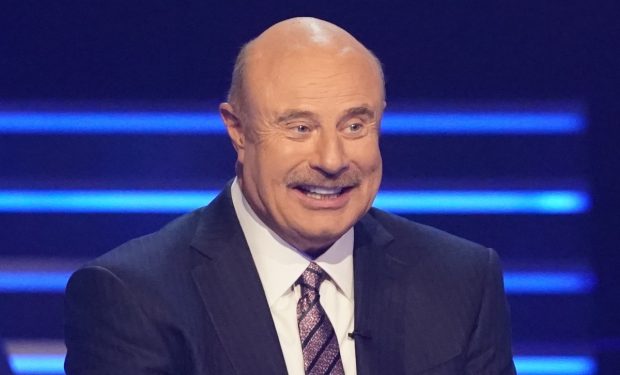 TV host Jimmy Kimmel welcomes three new celebrities to the game show Who Wants To Be a Millionaire: two comedic actresses Lauren Lapkus (Orange Is the New Black) and Kaitlin Olson (It’s Always Sunny in Philadelphia), and talk show host Dr. Phil McGraw, who is playing for his charity When Georgia Smiled.

When not on TV, Dr. Phil spends time with his family including his son Jay McGraw (Bull, The Doctors, To Tell the Truth executive producer) and daughter-in-law Erica McGraw, who live in Calabasas, California, the wealthy L.A. suburb where Keeping Up with the Kardashians is filmed.

Erica is one of the Dahm triplets who were the Playmates centerfold for the Girls of the Big Ten December 1998 issue of Playboy magazine.

The 42-year-old mother of two still looks fabulous in tiny string bikinis as seen in the photos above and below.

That’s Erica on the right in the string bikini pics below.

Who Wants To Be a Millionaire airs Thursdays at 8 pm on ABC, right before Holey Moley II: The Sequel where miniature golf enthusiasts compete on an extreme obstacle golf course. [Watch on your phone with the ABC GO Digital App found here. Download is FREE.]