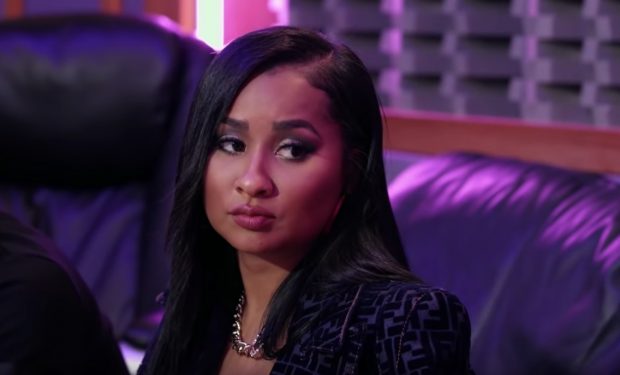 Tammy Rivera, Tammy and Waka: What the Flocka? on WEtv

Love & Hip Hop Atlanta power couple Tammy Rivera and her rapper husband Waka Flocka Flame have appeared on many reality TV shows including Marriage Boot Camp: Reality Stars, Hip Hop Edition. Now they’re the stars of their own show, Waka and Tammy: What the Flocka, on which they argue about money and family responsibilities. (See video clip below.)

Fashion-forward Tammy is always rocking the latest designer clothes as seen in the photo above. While crouching low in a tight off-the-shoulder bodysuit, she hides most of her face under a leopard-print bucket hat by Burberry (which match those cool high-top Burberry sneakers). When Tammy added the hashtag #wtf, some fans were confused. Does she mean wtf, as in what the f—? or is she referring to the show What the Flocka?

For the red carpet premiere of Tammy and Waka: What the Flocka?, Tammy wore a sheer white lace jumpsuit (see above) which really popped next to Real Housewives of Atlanta star Kandi Burruss‘ black mini dress.

Tammy and Waka: What the Flocka airs Thursdays at 10 pm on WEtv.