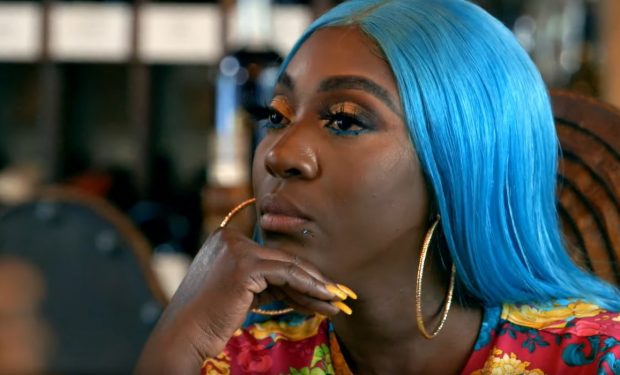 On Season 9 of Love & Hip Hop Atlanta, Jamaican entertainer Spice aka the queen of Dancehall, is now “free and ready to spread her wings” with the help of her new manager, Shaggy. Still, the goal of breaking through the American mainstream media isn’t an easy one to achieve. [Stream Love & Hip Hop Atlanta NOW!]

When not filming Love & Hip Hop Atlanta, Spice is promoting herself and her music with provocative photos including the one above where she’s wearing a barely there chain-link dress without a bra and with her legs spread open.

Note: Spice is to be honored with the official title “Queen of Dancehall” during the annual Reggae Sumfest which is scheduled in June in Montego Bay.

She captioned it: “Bored at home, ask a question and I’ll answer below.” No, she’s never been married and she stands 5’2″ tall. The latter answer surprised many of her fans who thought she was “way taller.”