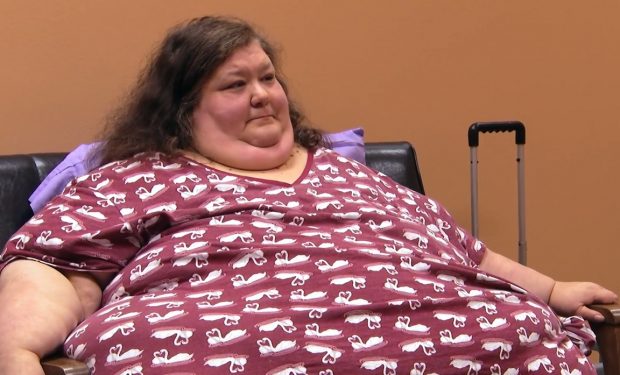 On Season 8 of My 600-lb Life, the TLC cameras follow Joyce, a Kansas woman who weighs 611 lbs. and hasn’t left the house in three years. She can barely move so she must do everything in her bedroom — including going to the bathroom (she uses a portable potty chair). When the help of her friend/caregiver Dawn and Joyce’s mother, also named Joyce, she travels to Houston, Texas to meet Dr. Now.

Dr. Now tells Joyce she needs to lose 150 lbs. in three months and prescribes therapy. But when Joyce goes to a session with her mother, the daughter doesn’t talk about the hurt in her past.

When it comes time for her next appointment with Dr. Now, after the three months have passed, Joyce says, “I called Dr. Now and pretty much begged him for a medical transport and thankfully he agreed.”

When she arrives at his office she says “Last time Dr. Now said my weight was 611, but I still think there was a malfunction with the scale and that I actually weigh a lot less.” She’s disappointed to learn that she’s actually gained weight.

“The scale has to be wrong,” she says. Angered, Joyce says she doesn’t think Dr. Now is being fair or reasonable. After leaving his office, she says, “I am not failing the program the program is failing me. How is that my fault?”