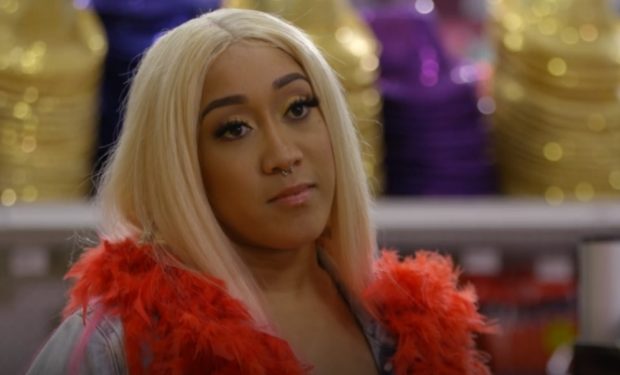 On Season 3 of Love & Hip Hop Miami, while veteran rapper Trina recruits emerging female rappers for her all-girl tour, Miami Tip has been spending a lot time with her client Sukihana. In the video, Miami Tip goes with Sukihana to MetroWrapz, where a pink camo-wrapped Land Rover is unveiled and given to her by her man Kill Bill who’s “locked up.” (See video below.)

When in Rome… Miami Tip (who’s rocking a head to toe black-and-white stripped bodysuit) posed on the hood of a red Ferrari.

With her legs open, she captioned the pic: “PUT DAT THANG IN SPORT.”

When not filming Love & Hip Hop Miami — which airs Mondays at 9 pm on VH1, right after Love & Hip Hop New York at 8 pm — Miami Tip spends time with her mother and 14-year-old son. Watch the sweet deleted scene below… [Watch on Your Phone VH1 shows anytime — VH1 app is free]