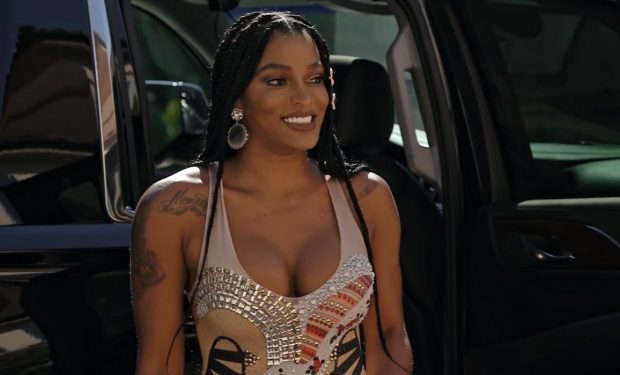 There are two Love & Hip Hop stars working on their relationships on Season 14 of Marriage Boot Camp: Reality Stars, Hip Hop Edition. Bianca Bonnie (from LHH New York) is with her man Chozus, and Joseline Hernandez from LHH Atlanta (with her ex Stevie J) and now LHH Miami with her husband Balistic Beats.

Joseline is also the star of a new series Joseline’s Caberet: Miami on the Zeus Network which she’s promoting hard.

When she showed up to the Zeus Network Super Bowl watching party, Joseline rocked a super tight cut-out mini dress with spaghetti straps that flaunt all her curves.

She captioned it “Zeus Network Crew” but fans were left scratching their heads wondering aloud if Ray J has something in the works with the Zeus Network. Turns out Ray J’s wireless earbuds company Raycon co-sponsored the party.