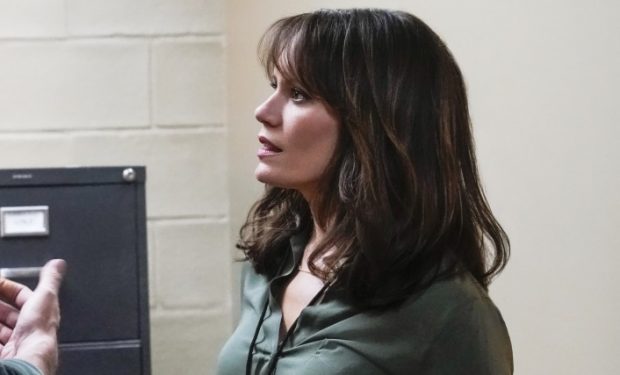 On the SEAL Team Season 3 back-to-back episodes “Siege Protocol, Part 1 and 2,” the Bravo Team travels overseas to extract a CIA agent who is being held hostage. Meanwhile at home, Jason Hayes (David Boreanaz) gets physically closer to Dr. Natalie Pierce (Emily Swallow) in the basement — only to be interrupted by Jace’s daughter Emma (Kerri Medders). Watch the adorably awkward moment in the sneak peek video below.

When not filming SEAL Team, Emily Swallow (who’s also known for her role as Kim Fisher on The Mentalist) is likely in front of a camera. When she posted these red leather (actually pleather) pants pics, her fans went crazy with compliments. As one wrote: “Holy smokes!”

Wow she is gorgeous, and that spread-out-take-up-some-room crouch is such a power pose!

SEAL Team airs Wednesdays at 9 pm on CBS, right after Survivor at 8 pm. [Watch On Your Phone with Amazon Prime or CBS ALL-ACCESS with free trials.]