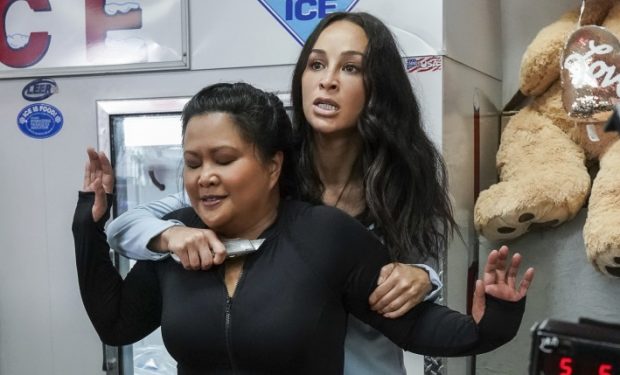 On the Hawaii Five-0 episode “He Kauwa Ke Kanaka Na Ke Aloha” (Man is a slave of love), it’s Valentine’s Day but Tani (Meaghan Rath) and Noelani (Kimee Balmillero) don’t find much love when they walk into a convenience store and are held hostage by a violent (and gorgeous) robber named Bonnie.

Bonnie is portrayed by actress Cara Santana. When not on a TV set, Cara Santana is often in front of a camera.

In the super glamorous photos above, taken at the Four Seasons in Beverly Hills, for Loreal mascara, Santana posed almost topless and wrote: “Not all looks need false lashes, sometimes all you need is a little Lash Paradise Mascara.”

It’s not the first time Cara has ditched her top to strike a pose. She captioned the string bikini pic above: “tries to thotiana for Instagram ➡️➡️ fails miserably.”

Note: These photos were posted before Santana announced that she and her long-time boyfriend, Chesapeake Shores actor Jesse Metcalfe, split after 13 years.

Hawaii Five-0 airs Fridays at 9 pm on CBS, right after Magnum, P.I. at 8 pm and right before Blue Bloods at 10 pm.