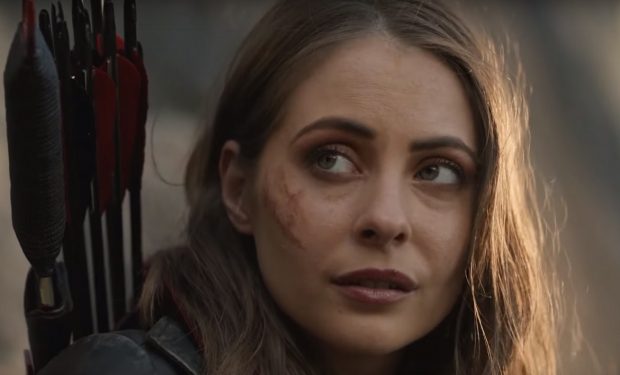 The DC Comics character Thea Queen, nicknamed Speedy by her older half-brother Oliver Queen (Stephen Amell), is back for the final season of The CW series Arrow.

On Season 8, Oliver reunites with Thea (Willa Holland) and fills her in on his impending death. “A crisis is imminent.” (The series finale episode, “Fadeout,” will air Tuesday, January 28.)

When not filming Arrow, the gorgeous 28-year-old L.A. native Holland enjoys the outdoors and often in a bikini as seen in the close-up photos above and below.

Many fans are leaving comments about the tattoos on her thigh: one is a smiling face the other is a frowning face, i.e. 🙂 and :(.

Fun fact: Holland’s mother, actress Darnell Gregorio-De Palma, was remarried to director Brian De Palma (Scarface, Carlito’s Way) from 1995–97 (when Willa was between the ages of 4 and 6).

Arrow airs Tuesdays at 8 pm on CW, right before DC’s Legends of Tomorrow at 9 pm.