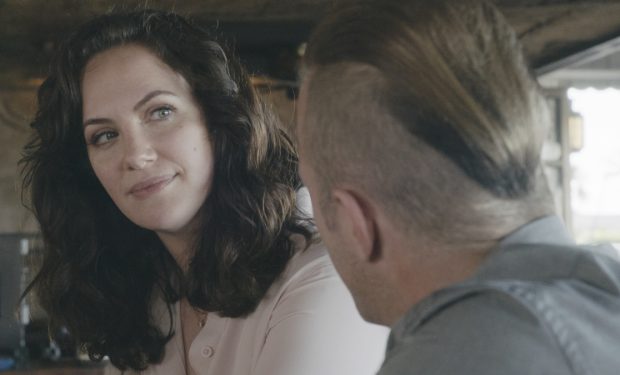 In the Hawaii Five-0 episode “I ho‘olulu, ho‘ohulei ‘ia e ka makani” (translated “There was a lull, and then the wind began to blow about”), while McGarrett (Alex O’Loughlin) discovers that Eddie the dog is showing signs of PTSD, Danny (Scott Caan) meets the girl of his dreams, Leslie.

But soon after, the couple gets into a potentially fatal car accident in a remote area. (Sneak peek video below.)

Leslie is portrayed by Kate Siegel. She’s known for her roles in horror movies and series (some of which she co-writes with her husband Mike Flanagan) including Ouija: Origin of Evil, Gerald’s Game, and Hush.

On Instagram, Siegel points out that the one psoriasis commercial she did “paid more than all of those combined.”

Siegel currently stars in the Netflix series The Haunting of Hill House, created by her husband and based on Shirley Jackson‘s novel of the same title, see left.

Hawaii Five-0 airs Fridays at 8 pm on CBS, right before Magnum, P.I. at 9 pm and Blue Bloods at 10 pm. [Watch On Your Phone with Amazon Prime or CBS ALL-ACCESS. Both options offer free trials.]