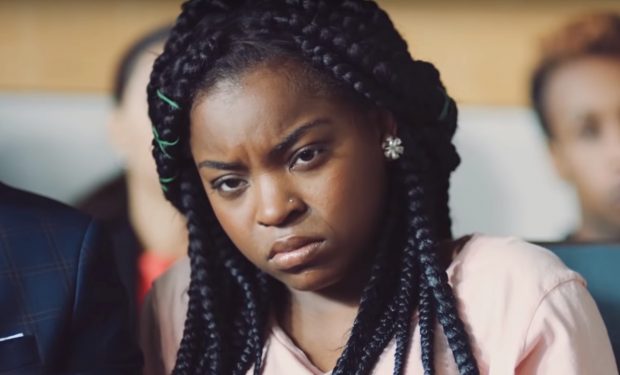 Rayven Ferrell in Stolen By My Mother: The Kamiyah Mobley Story (Lifetime screengrab)

The Lifetime movie Stolen by My Mother: The Kamiyah Mobley Story is based on the real life of Kamiyah Mobley who was taken from the hospital soon after she was born by Gloria Williams, a woman Kamiyah thought was her biological mother until she was a teenager.

When not on a TV or movie set, the 24 year old actress Rayven Ferrell is often in front of a camera and sometimes in a bikini, as seen in the photos above and below. When Ferrell posted the outrageously revealing close-up underboob bikini pics above (make sure to swipe), Greenleaf actress Desiree Ross wrote: “Ok sis go awfff.”

Ferrell will appear next in the drama, The Violent Heart with Kimberly Williams-Paisley and Mary J. Blige, among others.

Stolen by My Mother: The Kamiyah Mobley Story premieres on Lifetime on Saturday, January 18 at 8 pm. [Watch on your phone with Lifetime Live On Demand TV app here. Download is FREE.]