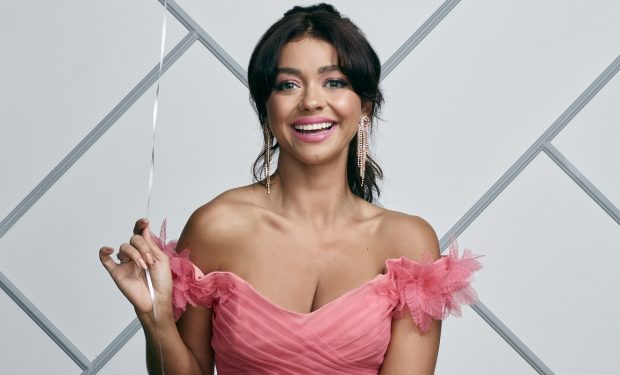 On the Modern Family episode “Dead on a Rival,” while Mitchell (Jesse Tyler Ferguson) learns a valuable life lesson when Murray (Paul Dooley), a former resident of the house, shows up unexpectedly, Manny’s dad Javier (Benjamin Bratt) shows up too with a big opportunity for his son, whether Gloria (Sofia Vergara) approves or not.

When not filming the final season of Modern Family, Hayley actor Sarah Hyland is turning heads on the red carpet. For the SAG awards, she wore a navel-plunging dress with a high-low hemline that revealed her super-toned arms and legs.

Several celebrity friends left comments including “fave look” and “goddess” and fashion critic Kelly Osbourne wrote “wow wow wow.” Make sure to swipe the photos above to see the criss-cross back!

Privileged star Ashleigh Newbrough wrote: “I don’t know how else to say this but you belong on my shelf of collectible Barbies that aren’t allowed to be touched…I wish I still had it!”

Modern Family airs Wednesdays at 9 pm on ABC. [Watch on your phone with the ABC GO Digital App found here. Download is FREE.]