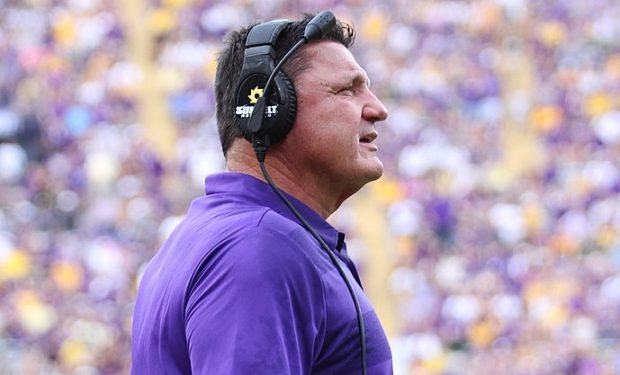 Ed Orgeron is head football coach at Louisiana State University (LSU), where the former defensive lineman played for his freshman year of college (he finished at Northwestern State).

When not on a NCAA football field, the 58-year-old Louisiana native spends time with his gorgeous wife Kelly Orgeron, mother of his twin sons Cody and Parker, and to Tyler, Kelly’s son from a previous marriage.

In February, Ed and Kelly will celebrate their 23rd wedding anniversary! Wow, she looks amazing with those twin boys!

The LSU (14-0) vs. Clemson (14-0) College Football Playoff National championship game will broadcast live from Mercedes-Benz Superdome in New Orleans at 8 pm on all ESPN channels. [Watch on your phone with ESPN digital app. It’s free to download.]