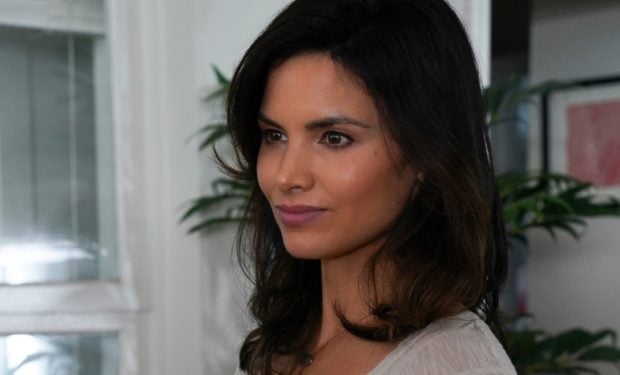 In the first-ever Hawaii Five-0 / Magnum P.I. crossover, “Desperate Measures,” Steve McGarrett (Alex O’Loughlin) and Five-0 join forces with Thomas Magnum (Jay Hernandez) and his detective friends. Together the two teams try to find the criminals who have stolen a list of undercover CIA agents.

When not filming Hawaii Five-0, actress Katrina Law (who plays Quinn Liu) spends time with her husband and adorable baby girl — or posing in front of a camera.

When Law welcomed the New Year with the smoking hot black lingerie photo above, singer/actress Christina Milian, replied: “You really should stop showing up to my house like this! But you know what f it.. see you tomorrow. I’ll make pancakes. 🤗 Happy New Year!”

More than one fan simply responded, “Goddess.” We see that, too!

Based on the bikini pics above and below, looks like 2019 treated Law all right!

Hawaii Five-0 airs Fridays at 8 pm on CBS, right before Magnum, P.I. at 9 pm, and Blue Bloods at 10 pm. [Watch On Your Phone with Amazon Prime or CBS ALL-ACCESS. Both options offer free trials.]