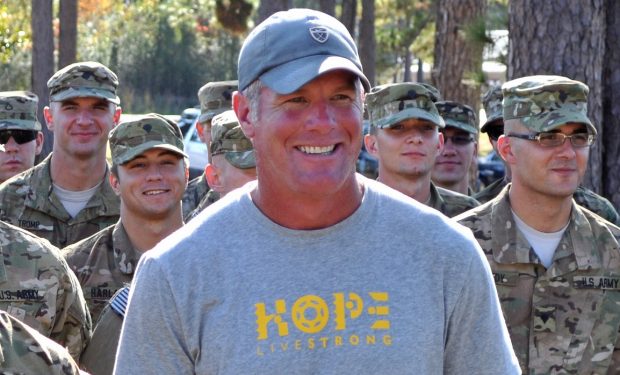 The Seattle Seahawks (12-5) face the Green Bay Packers (13-3) in an NFC Divisional game at Lambeau Field in Green Bay, Wisconsin. Packers quarterback Aaron Rodgers wants another shot at the Super Bowl (he won a ring in 2011).

Before that, NFL Hall of Famer Brett Favre and the Packers beat the New England Patriots at the Super Bowl in 1997.

When not watching the Packers, former QB Favre spends time with his family including his wife of 23 years, Deanna Favre, and their two daughters — Brittany Favre, 30, and Breleigh Favre, 20. Breleigh aka “Bre” is a 6’2″ collegiate volleyball player at Southern Miss (her father’s alma mater).

While at home in Biloxi, Mississippi for the holiday break, Bre ran 13.1 miles with her parents. When her dad posted the photo above, former NFL star Deion Sanders commented on Favre’s “guns” and former pro cyclist Lance Armstrong wrote: “Congrats Bre!!”

(Brett Favre was a guest on Armstrong’s podcast in 2017…)

The NFC Divisional game between the Seattle Seahawks (12-5) and the Green Bay Packers (13-3) will be broadcast live from Lambeau Field on Sunday, January 12 at 6:30 pm on FOX. [Watch On Your Phone:FOX NOW: Live & On Demand app download is FREE.]