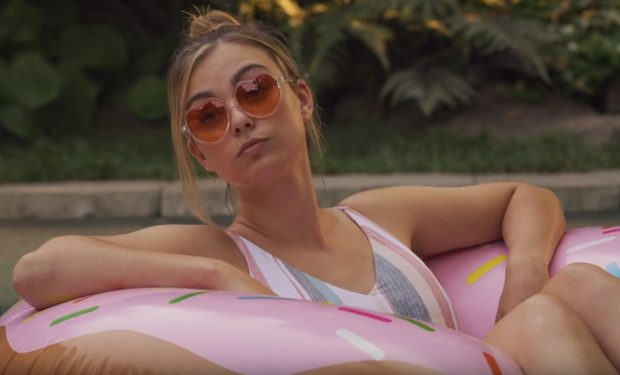 The protagonist of the Lifetime movie The Babysitter’s Revenge (originally titled Glass Houses) is teenage babysitter Carrie Dawson (Aviva Mongillo). After suffering a humiliating family scandal, Carrie discovers that neighbor Madeline Cooper (Bree Turner), who’s running for political office, is to blame. Carrie sets out to bring Madeline down before the election by revealing her scandalous secret. [Lifetime movies are streaming now.]

When not on a TV or movie set, Mongillo (who’s best known for playing Charlize Theron’s younger character, babysitter Charlotte, in the 2019 film Long Shot with Seth Rogen), enjoys her days off and often in a bikini!

Swipe the photo above to see the video where the gorgeous 21-year-old actress dances in that strapless bikini in the rain!

She also looks great in a dry bikini, under the sun! She captioned the photo series above: “going into 2020 looking and feeling like an absolute goddess.”

The Babysitter’s Revenge premieres on Lifetime Movies on Thursday, January 9 at 8 pm. [The Lifetime Live On Demand TV app here. Download is FREE.]