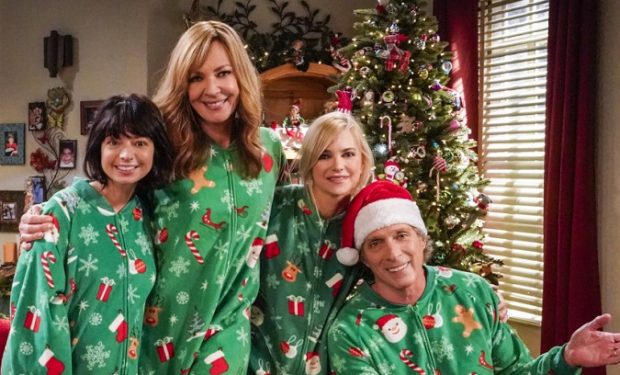 In the Mom episode “Higgledy-Piggledy and a Cat Show,” Bonnie (Allison Janney) is forced to relive painful Christmas memories when her daughter Christy (Anna Faris) recounts tales from her childhood to Bonnie’s new sponsee, Patty.

Patty is portrayed by Kate Micucci, who is best known for her comedy band Garfunkel & Oates with Riki Lindhome, for which they were nominated for a Primetime Emmy Award in 2016. (Micucci plays John Oates from Hall & Oates; Lindhome plays Art Garfunkel from Simon & Garfunkel.)

Or maybe you recognize her voice from The Lego Batman Movie (Clayface), Scooby-Doo and Guess Who? (Velma), Cartoon Network’s Steven Universe (Sadie Miller) or Disney’s DuckTales (Webbigail Vanderquack), among others.

Mom airs Thursdays at 9 pm on CBS, right after The Unicorn at 8:30 pm and right before Carol’s New Act at 9:30 pm. [CBS streaming: Watch Survivor and/or any CBS show through Amazon Prime or CBS ALL-ACCESS. Both options offer free trials.]